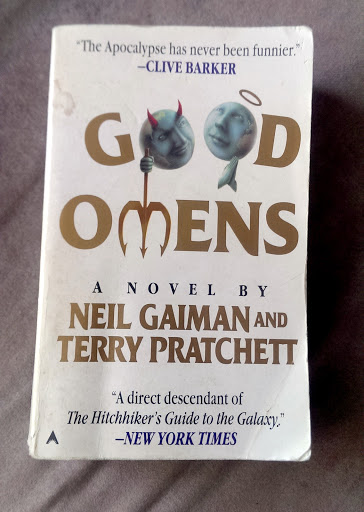 What can I say? If you know that it's a mixture of Gaiman & Pratchett, and you know either of their work, it will be exactly what you're expecting. Also, I think the quote about it being a direct descendant of Douglas Adams's Hitchhiker's Guide to the Galaxy is pretty darn accurate as well. (One caveat - the religious (or at least devoutly Christian) will probably not like or get it, and will probably end up rather offended. So if that's you, maybe skip it.)
Posted by Angela Knotts No comments: 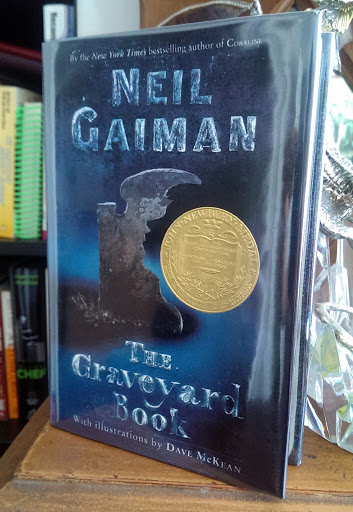 Oddly, I learned about this book by spotting it randomly in a bookstore back in the summer of 2007. It had an interesting cover, so I picked it up and spend a few minutes reading the back & flaps of the jacket & perusing the first few pages. After flipping through the rest of it and noting the, er, “uniqueness” of some of the formatting (more on this later), my curiosity got the better of me and I walked out with it, thinking I’d discovered some little-known but intriguing narrative gem.

Yeah, not so much. After reading the first couple of chapters, I decided to try to hunt down a few reviews or critiques online & see what I could find, which quickly disabused me of the assumptions I’d made about the book when I’d first found it. Googling [“House of Leaves” Danielewski:] turns up over 100,000 results, and the Wikipedia page devoted to the book is some 15 pages long. Apparently it’s had a cult following since its release in March of 2000.

So what can I write here about this book that’s in any way useful, without basically summarizing the Wikipedia page? Not entirely sure, but I’ll try.

In the most literal sense, HoL is about a young, articulate, troubled but intelligent (and even to some extent, intellectual) stoner named Johnny Truant who makes a tenuous hand-to-mouth living in Hollywood working at a tattoo parlor. In his quest for new digs, he and his constant companion Lude run across an apartment previously inhabited by an eighty-year-old blind man named Zampano, who has recently died there under suspicious circumstances. In the course of exploring the place, the pair run across what can only loosely be described as a manuscript:

“There were reams and reams of it. Endless snarls of words, sometimes twisting into meaning, sometimes into nothing at all, frequently breaking apart, always branching off into other pieces I’d come across later–on old napkins, the tattered edges of an envelope, once even on the back of a postage stamp; everything and anything but empty; each fragment completely covered with the creep of years and years of ink pronouncements; layered, crossed out, amended; handwritten, typed; legible, illegible; impenetrable, lucid; torn, stained, scotch taped; some bits crisp and clean, others faded, burnt or folded and refolded so many times the creases have obliterated whole passages of god knows what.”

Simultaneously and inexplicably disturbed and intrigued by the work, Johnny Truant takes the entire mess home and begins the arduous work of making sense of it all. And slowly but surely, the act of doing so begins to dismantle his life and sanity.

The work itself appears to be an academic critique of a film called The Navidson Record, which Johnny discovers soon enough does not exist. What’s more, many of the books and papers that Zampano references in the course of the project apparently don’t exist either. The well-known artists, academics, and PhDs that he alleges having been connected with the film say they’ve never heard of it or of a man called Zampano.

In any case, The Navidson Record is (supposedly) a film by a Pulitzer Prize-winning photojournalist named Will Navidson, which centers around the odd properties of the Virginia house that he and his long-time girlfriend Karen have just bought and moved into with their children. At first, the strange occurrences seem like nothing more than innocuous curiosities (the house measures incontrovertibly larger on the inside than on the inside by a quarter inch, then doesn’t), then become slightly more bizarre and disturbing (a smooth, black walk-in closet materializes in the master bedroom where it is not spatially possible for such a closet to exist, an extra foot of space appears between a wall and a bookshelf that used to fit against the wall perfectly, a fifty-six and a half-foot pitch-black hallway appears out of nowhere off of the living room). Navidson allegedly uses a combination of hand-held video cameras and motion-activated Hi-8s mounted throughout the house to document the family’s harrowing interactions with the house and with each other, later cutting it together along with footage taken by Karen to create the work known as The Navidson Record.

Except not. So, we have a falsified critique written by a dubiously sane blind man about a documentary which apparently doesn’t exist, created by a man who doesn’t exist about his experiences in horrifically mutable house, which seems not to exist, all compiled and interpreted by a somewhat unreliable and dubiously sane drug addict.

What is going on here, exactly? I suppose you could ask the same question of any work of art that is clearly meant to serve as more than entertainment. I mentioned the odd formatting above; no review of this book would be complete without some discussion of it. In reading the Wikipedia article, I learned a new term, Ergodic Literature, which apparently refers to literature that asks more of the reader in terms of understanding and interpreting the text than visually scanning line after line in the traditional left-to-right, top-to-bottom fashion and occasionally turning the pages. Whereas the arrangement of the text on the page is trivial in most books (because it’s arranged in the ‘default’ line-by-line, left-to-right, top-to-bottom fashion), that of ergodic literature is non-traditional and intended to convey some sort of meaning or significance.

And make no mistake, the ergodic nature of HoL has a lot to do with the fact that it’s taken me two and a half years of on-and-off reading to finish it. The book proper is 662 pages long, but because of the odd arrangement of the text, it’s difficult to translate that into something meaningful in terms of how long it will actually take someone to finish it. Some pages contain only a single or a few words; some are so densely packed with text that it can take several minutes to read and understand what’s there. Sometimes you spend several minutes reading such a page, only to realize that that particular text was totally irrelevant (or a replication of something you’d read before) and you could have skipped it altogether. Some pages contain only images, or staves of music.

The other thing that makes it hard to read and follow is the intensely pedantic tone and seemingly trivial yet length side-trips that characterize “Zampano’s” work (which several reviews have interpreted as Danielewski mocking the world of academia). Reading parts of it definitely reminded me of reading severely academic papers on obscure topics in college; for a while, you do your best to follow it and make an honest effort to understand its significance, and then you give a frustrated sigh and begin flipping through the next few pages in an effort to find the spot where things get interesting again. Which, I would agree, is probably intentional.

So you can hardly blame me for needing a break from it every few weeks for two years, sometimes after only a few pages. But, I was determined to get through it. Similar to what I’ve heard from folks who take on heavy-weights like Infinite Jest, War and Peace, or The Divine Comedy, apparently many more people start reading House of Leaves than actually finish it

Even in rereading just the first few opening chapters again to write this, I have to say that I think there are a lot of things that would make more sense to me on a second reading, and I might even begin to understand the significance of some parts of the story that were lost on me the first time around. On the other hand, I’ve got things to read, so wading through this one again will probably have to wait.

Who will like this book? Good lord; who even knows. People who like odd books? People who like a little academic satire? That’s my best guess. I did read a few reviews from people who classified it as horror and said it caused them to have trouble sleeping and to become suspicious about the dimensions of the rooms around them; to me this is complete and utter bullshit. There is nothing about this book that’s meant to be “scary” in the literal, concrete sense of the word. That, I feel pretty positive about.

Beyond that, though, I’d say you probably just have to read it. If you’ve got the literary stones, that is…