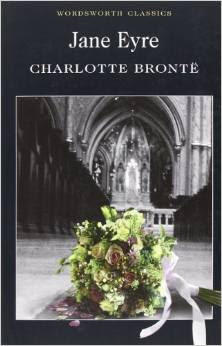 I think sometimes it's difficult to fully appreciate classics because the reason they are classics has mainly to do with the context in which they were written. Reading Jane Eyre for the first time in 2015, I have to admit that I spent most of it rolling my eyes & ready to chuck it across the room. Really, Jane? Really? It's so painfully clear that Mr. Rochester is a dire shitbird, and you are utterly pathetic for not realizing this almost immediately. (Though, I will also admit that she gets a little less pathetic as the book goes on, but he is still a shitbird, and their conversations are honestly kind of gross.)

BUT, I do get that it was rather revolutionary and radical for 1847 and (kind of hilariously) was actually lambasted for being anti-God/Church (ie, a woman every once in a while having an original thought and maybe occasionally for half a second not doing exactly what some rando self-important dude tells her to do). Still, a part of me was screaming throughout, JANE, YOU IDIOT! DTMFA!

The BBC's "The Big Read"

The BBC's top 200 literary works, based on a survey of over 750,000 UK readers! I literally just found out about this & am now compelled to mark up the list with ones I've read (bold) & which are on my imminent 'to read' list.


The Lord of the Rings by J. R. R. Tolkien - Junior year of college (too late; I never really got into it & the whole thing was sort of a slog.)

Pride and Prejudice by Jane Austen - I'm ambivalent about this book but I feel like I should read it just, y'know, to do it.

Harry Potter and the Goblet of Fire by J. K. Rowling - Junior year of college

To Kill a Mockingbird by Harper Lee - summer 2014

Winnie-the-Pooh by A. A. Milne - Oh god. No idea. Middle school?

Nineteen Eighty-Four by George Orwell - freshman year of high school, mostly under the desk in biology

The Lion, the Witch and the Wardrobe by C. S. Lewis - grad school

Wuthering Heights by Emily Brontë - again...just never been able to muster the enthusiasm

The Wind in the Willows by Kenneth Grahame

Little Women by Louisa May Alcott - 7th grade, for school

War and Peace by Leo Tolstoy

Gone with the Wind by Margaret Mitchell

Harry Potter and the Chamber of Secrets by J. K. Rowling - junior year of college

Harry Potter and the Prisoner of Azkaban by J. K. Rowling - junior year of college

Tess of the d'Urbervilles by Thomas Hardy - on the list!

The Grapes of Wrath by John Steinbeck - 11th grade, for school

The Story of Tracy Beaker by Jacqueline Wilson

One Hundred Years of Solitude by Gabriel García Márquez early 2014?

The Pillars of the Earth by Ken Follett

Charlie and the Chocolate Factory by Roald Dahl

Watership Down by Richard Adams - over Christmas 2013

The Count of Monte Cristo by Alexandre Dumas

Far from the Madding Crowd by Thomas Hardy - on the list!

The Shell Seekers by Rosamunde Pilcher

The Secret Garden by Frances Hodgson Burnett - 6th or 7th grade? Not sure.

The Stand by Stephen King

A Suitable Boy by Vikram Seth

The BFG by Roald Dahl - elementary school, not sure

Swallows and Amazons by Arthur Ransome

Crime and Punishment by Fyodor Dostoyevsky - earlier this summer

Memoirs of a Geisha by Arthur Golden

A Tale of Two Cities by Charles Dickens - 12th grade, for school

The Thorn Birds by Colleen McCullough

The Magus by John Fowles

Lord of the Flies by William Golding

The Ragged-Trousered Philanthropists by Robert Tressell

The Woman in White by Wilkie Collins

The Twits by Roald Dahl

I Capture the Castle by Dodie Smith

On the Road by Jack Kerouac

The Godfather by Mario Puzo

The Clan of the Cave Bear by Jean M. Auel

The Colour of Magic by Terry Pratchett - on the list!

The Alchemist by Paulo Coelho - been on the list for quite sometime actually...

Kane and Abel by Jeffrey Archer

Love in the Time of Cholera by Gabriel García Márquez

Girls in Love by Jacqueline Wilson

The Princess Diaries by Meg Cabot

Three Men in a Boat by Jerome K. Jerome - After reading Connie Willis's To Say Nothing of the Dog, I have to admit I'm curious.

Small Gods by Terry Pratchett - I started reading this in college & would like to go back & finish it!

The Beach by Alex Garland

The Pickwick Papers by Charles Dickens

The Wasp Factory by Iain Banks

The Day of the Jackal by Frederick Forsyth

The Illustrated Mum by Jacqueline Wilson

Jude the Obscure by Thomas Hardy

The Secret Diary of Adrian Mole, Aged 13¾ by Sue Townsend

The Cruel Sea by Nicholas Monsarrat

The Mayor of Casterbridge by Thomas Hardy

The Dare Game by Jacqueline Wilson

The Picture of Dorian Gray by Oscar Wilde - this year!

The Day of the Triffids by John Wyndham - on the list!

The Forsyte Saga by John Galsworthy

The Poisonwood Bible by Barbara Kingsolver - People keep recommending this to me so I suppose I should just read it.

The Hound of the Baskervilles by Arthur Conan Doyle

Possession: A Romance by A. S. Byatt

The Master and Margarita by Mikhail Bulgakov - A friend loves this one so I may give it a shot.

The Handmaid's Tale by Margaret Atwood - In one sitting, junior year of college

Danny, the Champion of the World by Roald Dahl

East of Eden by John Steinbeck

The Color Purple by Alice Walker

The Thirty-Nine Steps by John Buchan

Girls in Tears by Jacqueline Wilson

All Quiet on the Western Front by Erich Maria Remarque

Behind the Scenes at the Museum by Kate Atkinson

It by Stephen King

James and the Giant Peach by Roald Dahl

The Green Mile by Stephen King

Men at Arms by Terry Pratchett

Master and Commander by Patrick O'Brian

Thief of Time by Terry Pratchett

The Fifth Elephant by Terry Pratchett

The Silver Sword by Ian Serraillier

One Flew Over the Cuckoo's Nest by Ken Kesey - this year!

Heart of Darkness by Joseph Conrad - 12th grade, for school

Kim by Rudyard Kipling - After Tinker, Tailor, Soldier, Spy and Declare, I'm curious to read this one.

Moby-Dick by Herman Melville - Let's be real, it ain't happening.

The World According to Garp by John Irving - on the list!

Girls Out Late by Jacqueline Wilson

The Witches by Roald Dahl

The Old Man and the Sea by Ernest Hemingway - on the list!

The Little Prince by Antoine de Saint-Exupéry - meant to read this one last year & got sidetracked, so definitely on the list

The Suitcase Kid by Jacqueline Wilson

The Power of One by Bryce Courtenay - on the list

American Psycho by Bret Easton Ellis - DEF on the list

The Diary of a Nobody by George and Weedon Grossmith

The Unbearable Lightness of Being by Milan Kundera - on the list

Man and Boy by Tony Parsons

The Truth by Terry Pratchett

The War of the Worlds by H. G. Wells

The Horse Whisperer by Nicholas Evans

A Fine Balance by Rohinton Mistry

The Once and Future King by T. H. White - on the list

Flowers in the Attic by V. C. Andrews

I'll Give You The Sun, by Jandy Nelson 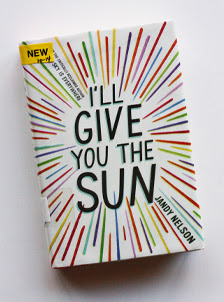 This may be the absolute best modern YA novel I've ever read in terms of teenage characters who are actually believable in terms of how they think, act, and (especially) talk.

It's also just a lovely, if bittersweet, story about a set of artsy teenage twins trying to navigate their own & each other's tumultuous lives in the wake of their parents' own issues, and manages to strike a nice balance of humor, heartache, sweetness, and raw teenage emotion without veering too much into melodrama (or trying so hard to ape modern teenage lingo that it's painful).

Still a *bit* too much schmoopy in places for my taste, but not so much as to make me want to vomit (which more or less seems to be the norm with YA). A great read for 12/13+, but there's plenty going on for adults to appreciate as well.

Email ThisBlogThis!Share to TwitterShare to FacebookShare to Pinterest
Labels: fiction, YA

The Blue Girl, by Laurie Foos 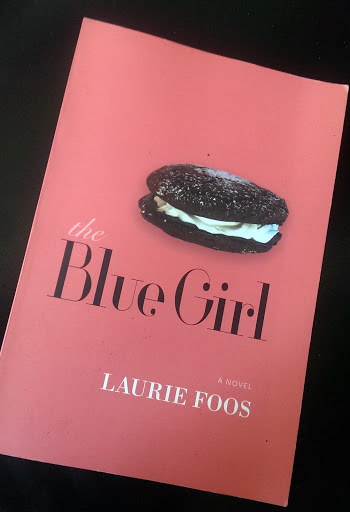 A super quick, easy, fairly minimalist read, and at the same time amazingly, gorgeously, breathtakingly written. I'm not sure how you do both of those things at the same time, but somehow Foos pulled it off.

A silent blue girl has appeared in an unnamed lake town; after one of their daughters saves the blue girl from drowning, three sad, middle-aged women with sad, middle-aged husbands, teenage daughters, and troubled sons sneak out at night to the cabin in the woods where the blue girl lives with an old woman to feed her the secrets they've baked into homemade moon pies. When the kids catch on, everything changes.

Again, I don't understand how she did it, but these 220 dream-like pages weave together some of the most brilliant character development I've read in a while with profound narrative themes & symbolism. Not a wasted word anywhere. Heartbreakingly beautiful.

Late to the party on this one! I picked it up in the airport because I wanted something short to read on a plane (it's ~200 pages or so), & having only seen the movie & never read any Palahniuk Chuck, I was curious. Super entertaining & amazingly well-written & well crafted. My only regret is that I wish I'd read it before seeing the movie. I also enjoyed the afterword at the end about how the book began as a six-page short story no one paid any attention to & evolved into an international blockbuster. The question now is, which Palahniuk to read next?
Posted by Angela Knotts No comments: