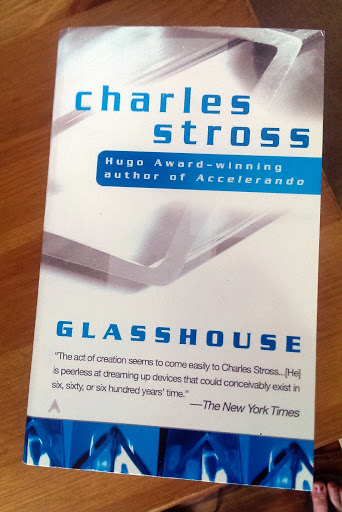 I am extremely picky about sci-fi, because a) I don't read enough of it to be "in" on a lot of the common language, so the made-up stuff often comes across as convoluted and confusing, and b) there is a lot lot LOT of terrible sci-fi out there that is terribly written & with no plot or believable characters to speak of. It took me a couple of chapters to get into "Glasshouse" (most of which covered the requisite "here's where / when we are & how stuff works"), but once the main story got going, it was interesting, creative (which I think is hard in sci-fi), full of dynamic & believable characters, and actually really funny at times. (I don't think it spoils anything to say that one of the main plot points early in the book is far-future people agreeing to be part of a sociology experiment where they're put into "ancient"--late 20th century--bodies & live "as the ancients" for a few years so that researchers can see how social interactions & relationships worked. Before the serious stuff goes down, this made for much hilarity without seeming like a gag.) A bit of a thriller & definitely keeps you interested in what happens next, but without getting so deathly serious that you feel like you need a nap afterward. Perfect if you want a bit of fun, engaging, interesting, well-written, not-too-creepy-&-weird sci-fi without a serious commitment.
Posted by Angela Knotts No comments: