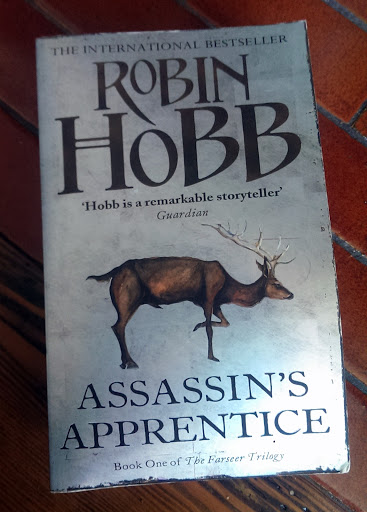 Whenever the topic of fantasy, particular 'high' fantasy or 'epic' fantasy or whatever term you want to use for books involving feudalism and swordplay and wizards and stew, is raised, I general tend to plant myself firmly in the "meh-not-really-my-bag" camp. (This in spite of the fact that GoodReads would have me believe I've read more fantasy than anything else.) Not because I'm concerned about getting labeled as one of *those* people (you know the stigma I'm referring to), but because in my experience, people who are into high fantasy are REALLY into high fantasy, and frankly just not always that discriminating about, like, plot and characters & stuff. There is just so, so much fantasy out there that is so, *so* unbelievably bad.

(My rule of thumb: Is there a map in the front? Some sort of royal orphan / bastard / otherwise problematic or mislaid heir? People inexplicably eating stew at every meal? Two out of three and I am OUT.)

So generally, unless I have a very trustworthy recommendation, I mostly avoid map-king-stew books, even when they appear over and over on OMG-Must-Read lists as Assassin's Apprentice has. (It actually had an additional strike against it, since the cover that showed up most often depicted some sort of deathly serious-looking man in a hooded cloak. I'm not sure what it is but books with serious men in dark cloaks on the front are almost always universally awful.) But Robin Hobb seemed to be getting a lot of praise from Patrick Rothfuss (who has himself written some *amazing* books with maps in the front & lots of stew-eating & menacing figures in dark cloaks on the cover), so I decided to give the first one a read.

And I have to say, this is the first high fantasy I've read in quite sometime that I didn't want to put down. It was too engrossing, too gorgeously & skillfully written. At the end of each chapter, I had to know what happened next. Somehow Hobb managed to pack in just about every trope in the book (see: The Tough Guide to Fantasyland) and *still* write a unique, unpredictable, yet satisfying story packed with three-dimensional characters and exquisite writing. Well done.