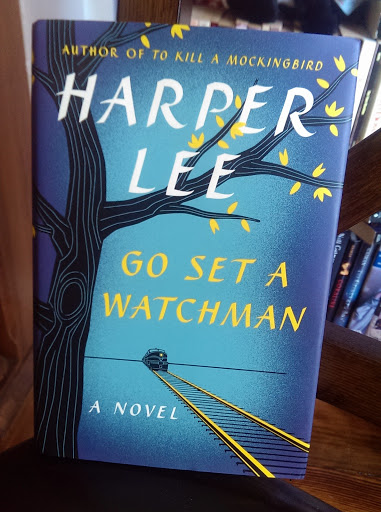 To quote literary agent Janet Reid (whose blog I adore), "I read the book this week (it was a necessity since so many people were talking about it)...I knew that lightning doesn't often strike twice. My expectations were reasonable to low." In fact I feel like I can write almost this entire review by quoting other people, because now that I've finished it, I keep running across things other people have said much more eloquently than I would have & thinking, "Yes, that."

Reid again: "I can see very clearly how an editor reading this suggested the revisions that became Mockingbird...Mostly though I think someone thought 'hey we can make a boatload of money here' and didn't give a single thought to whether it was something that should, rather than could, be done."

Christian Lorentzen of The Vulture: "It’s structurally clunky...Jean Louise’s disillusion is overdone...and it defies plausibility." To be fair, "For stretches, especially in the nostalgic passages, Lee’s charm is evident on the sentence level, and this is surely what made her editor believe in her." But still, "Go Set a Watchman is a lousy novel. Boring, sentimental, trite, and a bit ugly."

To the point of its being published purely to make a boatload of money, "The appropriate publication of Watchman would have been a scholarly edition issued a few years after its author’s death. The only person who comes out of this affair looking good is Tay Hohoff, the Lippincott editor who told Lee to start over...Had Go Set a Watchman arrived as a scholarly curiosity, however, rather than as a preposterously overhyped publishing 'event,' it would have taken its logical place in the ongoing debate about the racial politics of To Kill a Mockingbird."

Reid: "I don't think it's an accident that this novel came to light only after the death of Miss Alice, Harper Lee's sister, and after the author herself was clearly disabled by age and infirmity. Honest to god, this is as clear a lesson in why you don't publish trunk novel as I've ever seen."

In spite of all that, I actually did enjoy reading it for the historical interest, and I just can't get too worked up about people weeping over how it "ruined" Atticus / Mockingbird for them, because HI IT'S FICTION. You know, PRETEND STORIES about MADE-UP PEOPLE who are NOT REAL? Lee abandoned Watchman & started over with Mockingbird. That's the whole point. Enough with the melodrama already.

Besides, The Vulture article makes an interesting point about that as well: "For a generation or so, a contrarian club made up of a minority of Mockingbird readers...have been arguing that Atticus Finch was less a saint seeking a political miracle than a man invested in the maintenance of the southern Establishment...The Atticus skeptics were at first angrily dismissed by the book’s many, many partisans devoted to the novel’s fairy-tale elements...As it turns out, the people who claimed to love the book most were wrong, and the ones who took issue with it were right. All along, Harper Lee had a more tortured view of the racial politics of the era, and the region, than her readers did...The inevitable conclusion is that she diluted the political complexity of her novel for us...We weren’t ready for an honest picture of a character based on her father...To judge by the first outraged response to the news that Atticus was all along, in Lee's mind, a white supremacist, we still aren't ready."

(Update: I thought this article from LitReactor in which Truman Capote reviews Watchman made some excellent points as well.)