Last time, I related the tale of how, with a single fifth grade arithmetic problem, Cathy Humphreys shook my confidence in my math abilities to the core and then rebuilt it again from the rubble, better, faster, stronger, because that's how she rolls.

1 ÷ 2/3 is tricky because, unlike, for example, 3/2 ÷ 1/4, the divisor does not fit evenly into the dividend. But once you understand the nature of the problem--what fraction of the unit in question comprises the leftover bit?--you can probably more or less make your way through most problems where the divisor is at least smaller than the dividend.

So hold onto your pantaloons, mateys; we're about to go off the map a bit. Here there be dragons, ie, problems where we are asked to divide a SMALL fraction by a BIGGER fraction.

(It's worth noting the phenomenon that happens, sometimes, when you start really digging into your securely-held math as part of professional learning. Yes, you have two math degrees and a teaching certificate and it's been many, MANY years since you would answer a question about whether it is possible to divide small numbers by bigger ones with anything other than "Of course you can, you silly so and so," but now Cathy Humphreys has been making you really think about it for a while and suddenly YOU JUST DON'T KNOW. Like, you're *pretty* sure, but maybe you're not so willing to put money on it.)

I did such a problem with some pre-service teachers a few years back to try to give them an opportunity to put themselves in the shoes of students who have some understanding of a topic but lack the robust, flexible conceptual understanding we want for them. (It also gave us lots of opportunities to talk about the dynamics of doing hard math together with a group. And yes, as I found the day Cathy Humphreys came to class when I was a teacher candidate, it turns out that sometimes 5th grade math counts as hard.)

***(NOTE: I don't actually remember what problem we did, and I don't actually remember the conversation verbatim. So I've tried to reconstruct it in *the spirit* of said conversation as much as possible, with a problem that totally *could have* been the problem we actually did. Knowing that what follows is partly a work of fiction, I hope you still find it interesting and/or useful.)***

We used pattern blocks, and of course we all knew going in that the answer was 2/5. The point was to really see why, from a concrete point of view, that had to be the case.

We had already done some problems with the blocks like the one in my previous post, and the teachers had gotten around to realizing that when we divide fractions we need to pay careful attention to our units and especially to when the unit changes. We had also had some conversations about how sometimes the way you model the problem in your head and how you express it in words can have a huge impact on how easy or difficult it is to make sense of. For example, for most people, asking "How many 2/3'rds fit into 1 whole?" is a lot more useful than asking, "How many equal groups of 2/3 can I fit into 1 whole?" Although mathematically the meaning of the two questions is the same, one is easier to make sense of when you're working with a concrete model.

WHO EVEN KNOWS IT IS PROBABLY JUST UNKNOWABLE.

But these guys and gals were future math teachers and not easily deterred. We work hard to establish a culture of "Half baked ideas are welcome ideas" and "Observations help us make sense even if they don't give us the answer," so when one teacher said sheepishly, "I think I figured something out but I don't know how it helps," we all paid attention.

Then someone remarked, "I think it helps if you say... 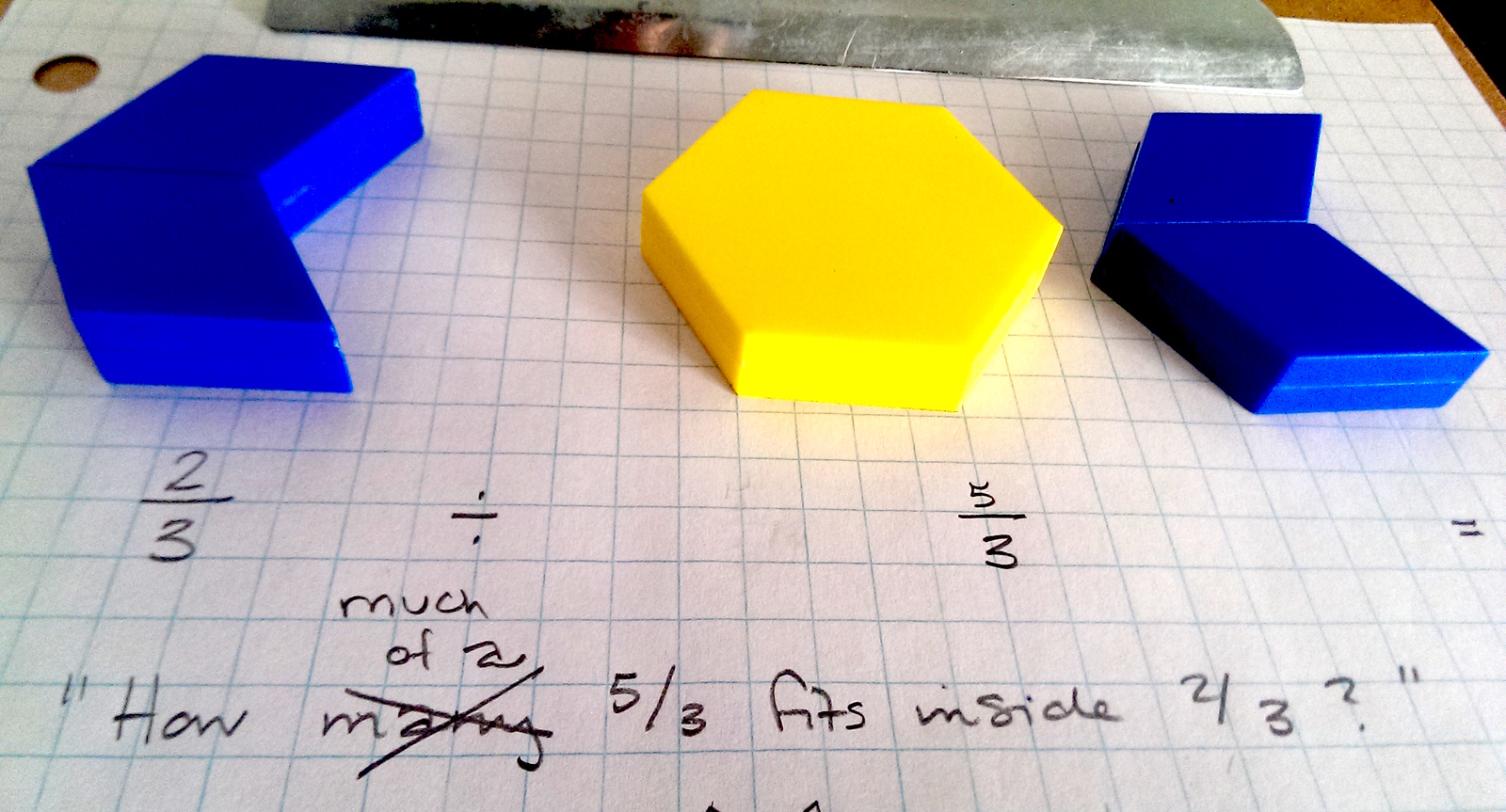 Another refined this statement further:

Most agreed that this question was more helpful, but they still weren't sure how to apply it. What fraction of 5/3 does fit into 2/3?

(Seriously. Read that sentence over again carefully three or four times. If you're like me, it will start to make sense about then.)

We chuckled at the notation a bit but agreed that, logically, it made sense.

We made note of this observation but kept searching for a way to really see the 2/5 in the manipulatives. After a few more minutes, one woman exclaimed, "Oh my god. How did I not see this?" 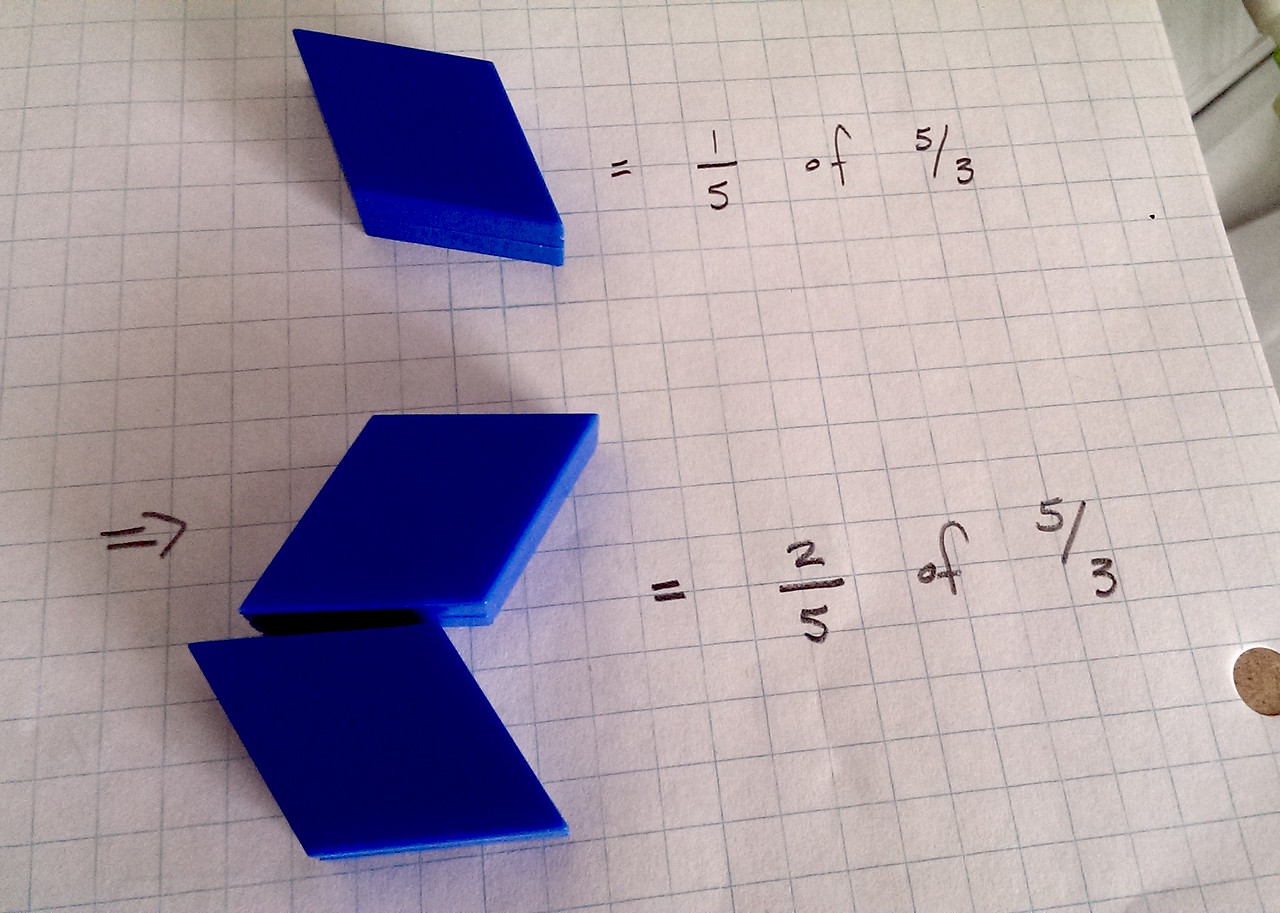 And, just as had happened in my first experiences doing fraction division with pattern blocks, once someone had pointed it out, the other teachers couldn't not see it.

"Seriously, how did we not see that for see long?" one asked. "It's so obvious!"

And the answer, of course, is that a lot of things are obvious in retrospect. You don't see it til you see it. It doesn't make sense until you stare at the pieces for long enough and think of just the right way to look at things.

Of course, having this conversation with secondary teacher candidates with undergraduate math degrees (or similar) is very very different from having it with elementary students whose understanding of what a fraction even is is still somewhat fragile. Whereas once these teachers saw it, they couldn't un-see it, we know that elementary students will need many, many opportunities to "see it" and think about it and represent it with words and manipulatives and whatever else before their understanding is solid. But for a moment, at least, our secondary candidates had a chance to look at something "simple" and appreciate just how much real, deep, sophisticated mathematics there was to unpack, and just what was required of them--even as content "experts"--to really, truly make sense of it.