A Head Full of Ghosts, by Paul Tremblay 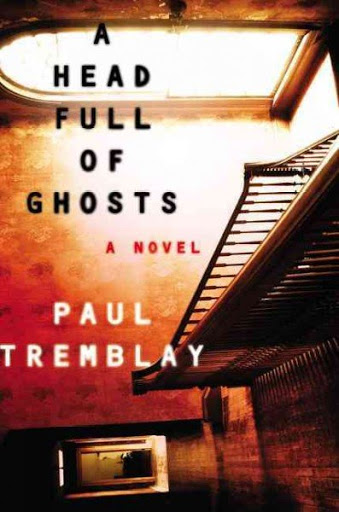 Last Wednesday I read an article on LitReactor called "6 Reasons Everyone Should Read "A Head Full of Ghosts" by Paul Tremblay". Apparently this book has been getting rave reviews by everyone and their mother since it came out in June, but this was the first I'd heard of it. I am not much of a horror fan so I suspected it wouldn't really be my thing, but LitReactor has often steered me very very right, so I read the article. And got the book the next day, and read it the day after that.

I owe the LitReactor article a lot, because the genius of this book is not really the kind of genius that is conveyed easily in a two-paragraph marketing blurb. The story follows the Barrett family (out-of-work, hyper-religious John, his cynical, frustrated wife Sarah, and their two daughters Marjorie and Merry, fourteen and eight respectively) as Marjorie descends into (severe mental illness? Demonic possession? A desperate bid to salvage the family's financial situation?). John gets the local minister involved, who in turn gets the family a reality TV deal ("The Possession"), which in turn leads to Complications, all of which is narrated by eight-year-old Merry.

That's basically the setup you get from the marketing copy, and based on that alone I probably would have skipped it because a) not really into horror and b) sounds a bit cliché, to be honest. But the real genius of this books is that it's kind of meta-horror. Instead of telling the story purely from eight-year-old Merry's perspective, Tremblay ups the ante by framing it as told by twenty-three-year-old Merry to a bestselling author who is writing a book about the events, and then interspersing those interviews with blog posts about the reality series "The Possession" written by a quirky & mysterious horror junkie. Because of the reality show, a lot of what happened is on film, but a lot of it isn't; there is also the reliability of Merry's memory to take into account. This all adds up to an undercurrent of uncertainty about what did and did not actually happen and to what extent was the situation was medical, supernatural, or faked by Marjorie and/or the exploitative reality TV producers.

In that context, the various horror clichés and tropes click into place. Rather than making the story predictable and derivative, they add layers of complexity to it and enrich the question of real/not real/supernatural/fake, and give the horror junkie blog posts lots to dig into in that obsessive-internetty-kind of way that the best bloggers have.

Finally, the dang thing is just brilliantly written, start to finish. As the LitReactor article put it, there are no bit parts. The real conflict & tension in the book is created by the interplay between complex, three-dimensional characters with vastly different goals and desires and understandings of what's happening. (I was particularly impressed with how believably eight-year-old Merry was written.)

All that said, A Head Full of Ghosts will not be for everyone. There are some disturbing scenes that, while they make complete sense in context and are not played for shock value, will be deal breakers for the squeamish (and possibly hyper-religious). But if you're more concerned with a smart, tense, well-written story that hooks you from the first page, you might give it a shot.

Books with which [book:A Head Full of Ghosts|23019294] has things in common, but is completely different than: